Thought I would drop in a few lines before I get going and headed to the track.

This is my first Long Beach weekend and I have enjoyed it so far. The event seems to have a bit more of a buzz than does a permanent road circuit like Mid Ohio or I would assume the others have. I enjoyed Mid O for the laid back atmosphere and I am contemplating a six pack of energy drinks before heading to the track this morning. Spent part of the day in the stands and part wandering around in the paddocks. I liked how the ALMS paddock was open to all comers, but clearly see the problems that would arise if the IndyCar paddock did the same thing.

I’ll be down in GS 40 in turn one again tomorrow and I think with P2P we may see a spicier race here than in some past years. Great location, can see cars flying down to turn 1, one of the best passing zones on the track, and then again heading into turn 6 to see if a pass sticks, you have a video monitor across the way and then you can see cars exiting the pits and blending back into the race. Really happy with the location.

A couple notes from the day: 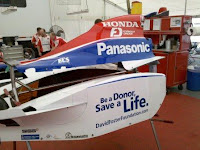 Hideki Mutoh is sporting some new side pods. The team has made the space available for “Be a Donor Save a Life” for the David Foster Foundation. I took special interest in this placement for a couple reasons. My sister in law donated a kidney last year and sending her the picture of the car made her day. It was another thank you reminder for her of the incredible sacrifice she made for the benefit of others. I lost my father from kidney disease when I was a year and a half old, back in the days before transplants were possible. This is a good thing NHL is doing here.

This is not the first time they have carried livery for a charity on the side of their car, Graham won St Pete with Hole in the Wall camps on the side of his vehicle. But this is an incredible community service. I wonder why this doesn’t become a more regular thing for teams without true primary sponsorship. It is great PR and linking it to a handful of driver appearances in the markets the league appears could certainly raise the profile of the league with special interest media pieces in those markets.

Some may argue that the empty side pod sends prospective sponsors the message that the hotel has vacancy, I would argue that most non profits have corporate donors and for those corporate donors, seeing their charity recognized by the league, raises the profile of the League with those same corporate entities when it is time to allocate promotional dollars. 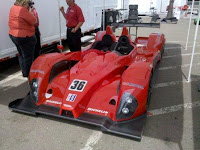 I spent a couple moments with JR Hildebrand in the ALMS pits yesterday. You all know how much I feel this young man is as vital to the future of the league as Graham or Marco. The good news is that he thinks things are coming together for a foray into the IndyCar series yet this year, but when you have such large amounts of money flying around, things take time and lawyers have to review contracts et Cetera.

Cavin reported that one of the engines Honda was working on for May was for Petersen racing. Petersen has been the co-owner of the Lights team (along w/Andretti) that JR raced for last year. Draw conclusions as you wish.

In the ALMS Race, JR was in the LMP Challenge car for Genoa Racing. Starting 3rd in the class, JR raced hard, busting moves all along the way and succeeded to move up to first in his class, picking off a LMP car along the way. As ALMS has a team of drivers in the car during a race and pit stops are not always as bang bang bang as they are in IndyCar, the team wound up back in third for the complete race. But JR was fast yesterday, I hope Randy Bernard was watching. Sir you want Future stars in this league? You don’t have to look any further than last year’s lights Champ… 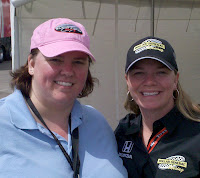 And Finally, Mrs JP had the meet up of a life time…A picture describes it best… Eat your heart out Pressdog…