Championship Contenders Defect from Series on Eve of Season Finale 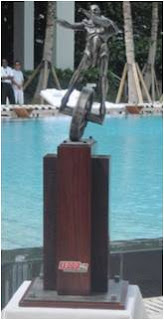 Izod IndyCar Championship frontrunners Dario Franchitti and Will Power have announced plans to leave the series just days before the season’s final race that was to crown the champion. Heading into the finale, only Power and Franchitti were mathematically still alive for the championship with Power leading Franchitti by 12 points.

Apparently the issue compelling both of them to leave the series relates to the unveiling of a new championship trophy for the series. “It’s a way wrong scary bugger ‘ee is” said Franchitti when asked to describe the new trophy. He added “Ashley won’t want that in the ‘ouse”.

Power seemed to be wavering on the decision, was quoted “It’s a very hard decision for me because It would be my first series championship, something I have fought for all year, but I can’t have that thing in my house, I’ll have nightmares”.

The trophy created by sculptor Ted Gall is meant to symbolic of man, machine and the symbiotic beast they become “We’re not just a human form; we’re what we use all the time,” said Gall. “It used to be if you were a cowboy you’d ride a horse. Now we’re really attached to wheels our whole lives. The arms are imploring; they’re reaching out for that golden ring, for that big win”. 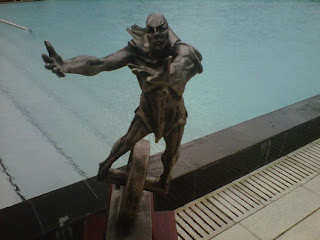 Other drivers were asked their opinion of the new trophy and reactions varied. “I think it is really interesting, reminds me of a time back home when a movie was being filmed and the call went out for extras to take part. I went down and they made me up in layers of brown makeup so thick my cheeks were numb. I think they said we were orcs or something. Not sure if they ever finished the movie or not but it was fun staggering around in the makeup making strange noises” said Scott Dixon.

“I am disappointed that they got rid of the old trophy, I promised my son that next year I would win it and he could take a bath in it” said Tony Kanaan. “He’ll take a look at this and he’ll cry”.

Danica Patrick was quoted as saying “and they wonder why I am leaving for nascar?”

IndyCar officials were confident that after initial reactions subside, both Power and Franchitti would return to their cars Saturday night. “We only create the trophies and prizes, it is up to the drivers to decide to accept them or not”. Said Brian Barnhart, President of Competition.

When asked what motivated the league to design such an unorthodox prize, President of Commercial Stuff, Terry Angstadt related “After Kentucky we were hanging out polishing off a case of Fuzzy’s, and we were thinking how hysterical it would be for Ashley to have to display some hideous monstrosity in her house after Dario finished off Power during the oval part of the series and then EJ Viso went by on his unicycle”.

IndyCar CEO Randy Bernard was quoted “We believe it is important to leave the politics of the split behind. That includes the symbols of that era, like the previous championship cup. Taking things further, we want people to forget that we are even an auto racing series. People said that in rejecting the Delta Wing, we weren’t bold enough, we didn’t take the risks necessary to move this series forward. I would suggest that this trophy represents a commitment to bold, risky thinking that will carry the series into the future”.

Persistent rumors suggest that there were other motives to the retirement of the IRL trophy. Rumors on the internet have sprung up suggesting that since the IRL trophy was made of solid Silver, it was sold to a local cash 4 gold location for an estimated $100,000 which was used to pay the bonuses to the two new discipline champions. The trophy was melted down and made into dental fillings.

Meanwhile, a perplexed Will Power struggled with his decision “I really want to win a championship. Maybe I can just take the hat home with me. They can keep the trophy at the Museum or something”.