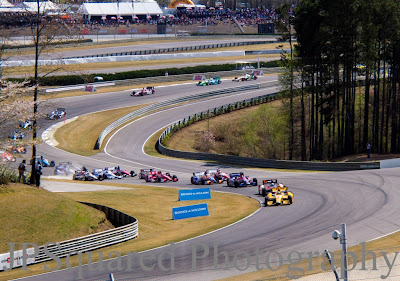 This year in addition to taking in the race at Barber we decided to stretch the weekend a few days.  So after the race, we drove to Tennessee and rented a small cabin in the mountains for a couple days.  Which implicitly implies – I haven’t seen the race broadcast yet.  SO my impressions will be based on what I saw at the track.


The race itself was Good for the series (a minimum rating I score for any race that has a green flag pass for the lead after the final pit stop not assisted by a yellow and restart).  Relative to the course itself, the race was “Very Good”.  It wasn’t the Excellent we saw last year, but compared to the first two races here both are good events.


One thing that concerns me a bit is what next year’s race will be like.  Last year was an adventure as no one really had the new car sorted yet and there were a lot of performance delta’s because of that.  This year, from the experience of last year’s race in the new car and the testing a few weeks previous, most teams (other than Panther – and we’ll talk about that at some point in the future) had their cars on blacks sorted pretty quickly.  The variable that made qualifications interesting and the race compelling was watching the teams sort out the new Red compound.


As we head into next year, What is the “change” variable that will keep teams and drivers scrambling and off balance enough to make for a compelling race?  Some probably still feel the league still owes them Aero kits, but I have low expectations on those and thus have moved on.  These teams (EXCEPT Panther) and drivers (INCLUDING JR) are talented enough that when everything is familiar, run so closely, even optimally, that we are likely to get a very uninteresting race on our hands.


Unlike Mid Ohio (where I gather there are few challenges for an IndyCar caliber driver to have individual moments) Barber can squeeze a mistake or two out of a few drivers and provide some position exchange potential.  But as the formula becomes completely sorted, will that be enough for a great event next year?  I have my concerns.


I have a pet experiment I would love to see IndyCar experiment with one day.  Spend the whole weekend running blacks.  All Practice sessions, all qualifying sessions are on the black tire.  Then during the 20 minute Sunday morning warm up – bust out with a red tire of unknown formulation.  Let the teams and drivers take that session the get a handle on the new rubber.  Then during the race require teams to do at least 2 stints on these alternate tires.  The introduction of this random variable and the delta’s it would create as teams and drivers both scramble to get a handle on this new element could make for some compelling on track action.


But then I am just a fan.  There must be some compelling unintended consequence that I am not thinking about.


One Blogger’s Financial Impact on the City of Birmingham


Heading into the Barber event there was some angst in the air regarding some city council votes that would finance the event both this year and for years future.  As with all news related to IndyCar some took this as a sign for the end of the world, or at least the Birmingham event.


As we checked into our hotel Friday, the desk manager asked us if we would consider taking a slightly different room than we were booked for.  He said the website had overbooked my room type and that the hotel was packed for the race and he was having to turn people away.  I struck up a conversation with him about how much business they did for the race and he told us the race weekends at Barber were some of their busiest of the year (right along with move in and Graduation for UAB).


I asked him why then would the city decline to continue funding the event that brought the city so much business, he said that the city was broke.  They had just been through a major embezzlement scandal with the previous mayor.  Between the money he pocketed and spent w/o oversight, the city was over the edge of bankruptcy.  Apparently the former Mayor and some combination of former officials were tried and sentenced to over 450 years for their looting of city finances.


We now know that the city paid up for its portion of this years race.  This year’s event drew over 56,000 for the weekend and the Sunday crowd, representing ~2/3rds of that number was the largest crowd ever.  An extension was signed with the race for another 3 years and the race will go on.


Now suppose 1500 other race fans that were not Birmingham residents visited and spent similarly, that would be $1,237,500 of revenue dropped into the city’s economy.  Most economists apply a multiplier to the impact of that infusion as that money diffuses through the community and is spent and re spent.  So let’s say that builds 5X to a $6.2M impact for the city.  Shave taxes off that represents ~$300 - $400 k of revenue for the city and over $5m for those living within the city.


I mention this as a potential tact or strategy for the league and promoters to persuade other municipalities with EXISTING race facilities to support an IndyCar race in their community.  Portland OR, or Salt Lake City might fit such a strategy well with the tracks near those cities.

Barber Saturday - A Familiar Face and a Few Images

I spent most of Saturday schlepping around Barber Motorsports Park toting my camera and a tripod hoping to capture some "Phantom Car" images.  No such luck - The GrandAm series which is usually money for 3 - 4 yellows that bunch the field up and make the images look good mustered a single caution period.

But I did bump into John Edwards in pit lane.  I have commented on John before and my thoughts on his potential addition to the IndyCar field HERE.  A quick summary - Coming up the ladder, John is a former Star Mazda champion and was the Formula Atlantics champion in the series Finale Season, beating out Jonathan Summerton and Simona DeSilvestro for the title.  Hailing from Cincinatti, Ohio, he was young at the time and remains so, 21 or 22 (I am too lazy tonight to look it up).

He currently drives for Stephenson Motorsport in both the GrandAM and Continental Tire series and is a developmental driver for RLL in the ALMS series.

Saturday was John's day - Winning the GT class in the GrandAM feature and placing second in the Continental Tire race later in the afternoon.  I said it two years ago and I say it now.  I wish someone in the IndyCar paddock would give this kid a chance.  Of course, any time you talk about adding a name to the series, you also have to ballance that with a subtraction.  But for starters, How about the 500?  Bobby?  Sarah?  JB?   Ed?  Anyone??  Bueller?  Bueller? 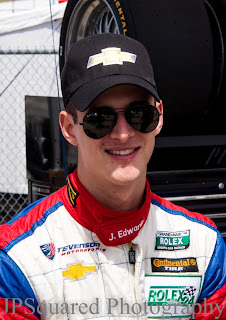 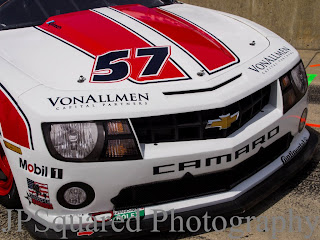 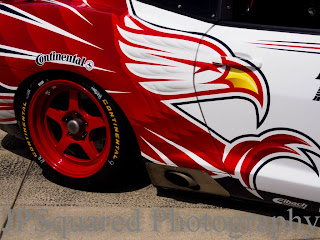 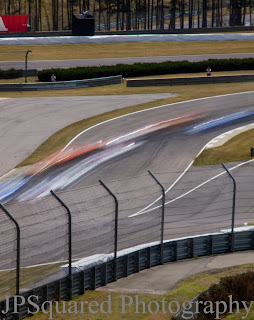 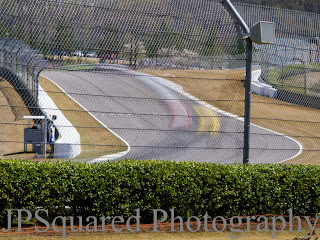