Still have some slots open!  Some Prime Spots opened up in Race 1 (AJ Wouldn't let Connor Come back)

We still need beverages and a another dessert for the Hospitality Canopy. 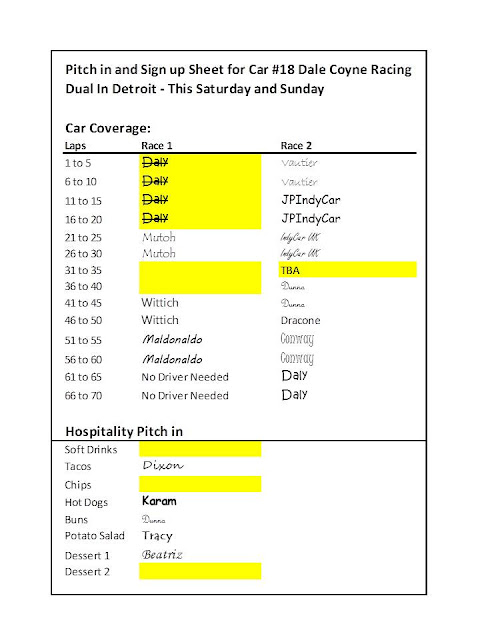 A time for sentiment or a time for experience?


As I sit to write this the IndyCar world is waking up on a Sunday morning still in shock over the shock it received yesterday.  If you are tuned in enough to have found this blog then you certainly know about the accident Sebastien Bourdais had during qualifying yesterday.  You also know what accumulated miracles the Safer barrier, the Dallara safety cell and Holmatro safety team are.  I can remember when an accident like what we saw yesterday led to permanent disfigurement or death for a driver involved.  Even these days, we have the recent memory of the tragic accident that stole both legs from Billy Monger in Europe to remind us of gains that have been made in the safety of the VICS.

We were with relatives in Ohio yesterday for a belated Mother’s Day visit.  I learned of the accident on twitter, followed the remains of qualifying on the In laws TV and then learned of the Injuries as we drove home.  It’s a morbid reality in racing that after one hears of an accident, after one first prays for the dismissal of a life threatening event, after the weathering of a first round of care for the driver involved thoughts turn the empty seat in the garage.  Racing is cruel that way.  It’s how she often provides opportunity where one did not exist the day before.  I recall JR Hildebrand making a comment about Zach Veach sitting in for him at Barber, while his hand healed – something to the point that it’s an unfortunate side to the business but that’s the reality of the business, one he had benefitted from in the past.

As I thought about who should get the seat, my first cynical thought was “No Connor, you can’t have your old seat back.” Then I started thinking about who would be a good fit here.  The complicating variable here to me is the lack of practice time remaining before the race.  Then it dawned on me how few options for such a driver are wandering around the paddock as compared to years gone by.  Deaths and retirements have shrunk the pool here.  Townsend Bell came to mind as did Alex Tagliani and Ryan Briscoe.  One was in Saudi Arabia, one racing regional nascar series in Canada and Ryan was on sportscar contract with Chip.

Soon on twitter and in spoken conversations a sentimental favorite emerged – Stefan Wilson.  Stefan deserved it for having selflessly stepped aside to let Alonso in the car at Andretti.  Yeah I get the heart tug emotional thing here.  But I also know that Stef is rusty.  Hasn’t run an IndyCar since last year’s 500 and has only EVER run two IndyCar races.  It has been since 2011 that he ran a full Season of IndyLights.  He has raced no other series of note in the time since.  If Stefan were to step into the car today, he would have two days of practice before running the race itself.  Nowhere near enough time to do something so fraught with danger.  I have nothing against Stefan, he seems to be an outstanding young man, but when he gets his next chance at this I want him to have the benefit of the IndyCar refresher protocol and a full month’s allotment of practice time.  Not a desperate flail for the sake of the immediate now.

Since I started this post, one of my dogs has had a heart attack, has been diagnosed with a degenerative heart condition (Hence the delay in a timely posting) and other names have emerged for the ride.  Brabham, Vautier and Davison emerged as candidates at some level, with the latter getting the nod.  All three of these drivers have very similar resumes to Stefan, with Vautier having the most VICS experience and a Lights title.  I have the same apprehensions for all of them as I do for Stefan.

I get the idea of ambition being part of being a racer, but responsibility is up to the series and owners.  I don’t know that I would let any of those young gentlemen step into this situation.  I would want to see a driver who have 4 – 5 recent runs at Indy or a couple recent Indy runs complimented by a career of  experience in VICS itself or other top level racing series.  Again I return to Briscoe, Bell or Tagliani.  Heck I might even prioritize Kurt Busch into this list.  Perhaps none were available.  But I would have felt better about the choice for the 500 if one had been chosen.  After that?  Let youth be served on the twisties or slower ovals.

But the decision has been made.  James Davison it is.  I wish him a safe race.  The reality is that Dale likely will open up the downforce drawer in the shop and empty it, revise his expectations and be content with a 25th place finish and a car that comes home in one piece.  I hope that’s what he gets.

I just don’t want to see a rusty youngster stuffing it in the wall because they haven’t had the opportunity to properly prepare for the task.
Posted by JP at 1:01 PM No comments: 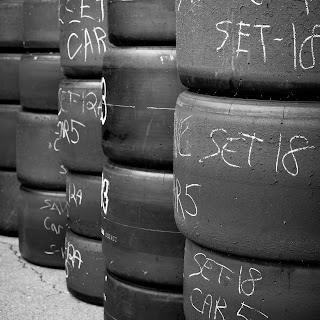